A week after meeting Dave Matthews in Chicago, I packed my bags and jetted off to Charlottesville to help many other adoring fans welcome Dave Matthews Band home.

I was excited to see my DMB friends from all around the country one last time before the New Year. The night before the first of two concert days, we met at the legendary Miller’s Downtown bar for a night of drinks and music.

As expected, Miller’s was completely packed with fans who had come from all over to eat, drink and be merry at the place where DMB began. Not long after arriving, we realized that Rashawn Ross and Jeff Coffin were expected to show up to play for a bit — something I was not planning on missing! I stepped outside for some fresh air and, sure enough, there was Rashawn chatting with five other fans. I went over to him and struck up conversation. I was surprised how reserved and quiet he was. He laughed and told me I was quite loud for such a small person — the opposite of him. Rashawn said he is still not used to all the attention he gets, and he isn’t sure he ever will be. 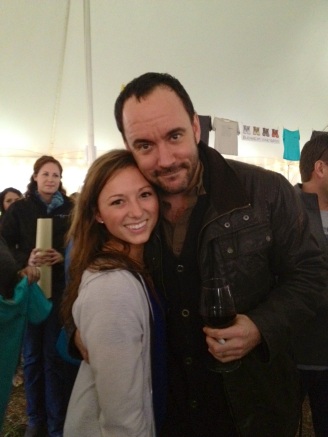 “I’m a lot like [LeRoi Moore] in that sense,” he said. “I don’t like attention, and neither did he. I try to keep to myself most of the time.”

Our conversation carried on for a bit longer but was interrupted when more fans became aware of his presence. He excused himself and went inside to play a few songs. Jeff Coffin had also joined the band at Miller’s. It was quite fascinating to see how small of a stage Miller’s had, compared to what DMB performs on.

After a few songs, Rashawn left and went back outside to talk to fans. Jeff had also wandered into the crowd. I was pleasantly surprised how laid back he seemed and how easy it was to have a conversation with him. We talked about the tour, his side projects, his spectacular beard and Away From the World.

“I really love playing Snow Outside,” he said. “Gosh, I’m such a chick!”

My weekend escape to Charlottesville was already shaping into one of those trips I would remember for a lifetime.

The next two days were filled with so much love, excitement and entertainment. As the weekend progressed, I was reminded how special the DMB community really is. The bond that we all share truly is incredible.

Sunday, after two phenomenal shows, I wasn’t quite ready to say goodbye. My flight didn’t leave until 8 p.m., so a small group of us headed out to Dave Matthews’ Blenheim Vineyards for some wine tasting.

The drive to Blenheim was breathtaking. The rich history of Virginia spilled onto the roadsides, creating the illusion of traveling back in time as we curved in and around valleys, trees and forests. As the six of us tasted wine and enjoyed the final hours of each other’s company, I suddenly saw an all too familiar shadow making its way into the tasting tent: Dave!

He casually strolled into the tent full of fans and other guests and began chatting, drinking, signing autographs and taking photographs. Not long after, Jeff joined him. Our group was lucky enough to get a group photo with them both — the cherry on top of my special weekend in Charlottesville.

The experience served as the umpteenth reminder of why I love DMB so much. It’s not solely because of the music and lyrics. No, that is just the beginning. I am obsessed with the atmosphere of the shows, the waiting in line, the people you meet, the family you make and the love and respect you share with the band. I could not have asked for a better way to end my year with DMB.

One thought on “Charlottesville, VA”