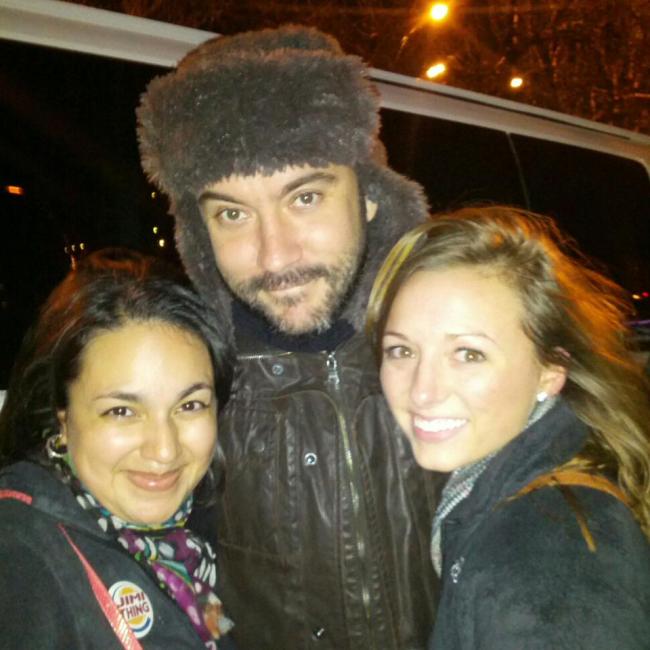 I arrived at the United Center around 9 a.m., surprised how warm it felt for a December morning in Chicago. The Midwest is used to having snow this time of year, so the 40-degree weather with the glorious sunshine beating down on us was a nice surprise. Meeting up with my friend Michelle wasn’t hard, because there were only about 15 of us in line at this time, hoping to get the best spot on the floor for that night’s Dave Matthews Band concert.

The temperatures dropped, and the minutes seemed to get longer and longer. For the next eight hours, the 15 of us that had been there from the start, chatted, sat, stood, walked around and anxiously waited that magic moment when we could escape the outdoors and make it safely inside.

Around 5 p.m., the hectic, chaotic entrance process began, and I eventually made it to the floor in front of stage left — my personal little piece of heaven. When my hands grabbed that guard rail in front of the stage, a sense of relief overcame my body. I glanced over my shoulder and was almost frightened by the scene I saw behind me. People were still jumping over the barricades, hurling their bodies in any direction that would get them closer to the stage.

The crowd finally settled and the waiting continued. Finally, the house lights fell and the roaring sound of applause and cheers filled the arena as seven shadowy figures made their way on the stage. Goosebumps overcame my body as my eyes, once again, met the very men that have captured my heart, soul and mind with their music. I held up my “Fonzle Me” sign for Stefan Lessard to read, and a smile spread across his face.

Each time I see the boys perform, it’s a completely brand new, magical experience. From the way Stefan strums his bass with passion and charisma to the way Carter Beauford beats those drums with such ease and power, erupting the audience into an ecstasy of enjoyment. Each of the members contributes his own special talents to create a sound that has captured devoted fans of various generations.

A smile was permanently glued to my face as I danced and sang along to every song, never wanting to miss a beat. The smile only grew bigger as the show ended and Stefan came down to the edge of the stage and handed me his pick. I felt like walking on a cloud. The day had gone from good to great, and I felt like it couldn’t get any better.

After the show, my friends Derek and Nidhi and I were planning to go to Boyd Tinsley’s after-show meet and greet. The three of us left the arena and headed to a taxi stand. Along the way, we walked by the gate that housed the band and crew’s buses. The gate, which is usually locked, happened to be open. I told Nidhi and Derek I was going to go in and check it out.

Unconvinced, Nidhi took my side and we told him we were going in to check out what was going on. Realizing he had no choice but to follow us, Derek joined us and we made our way through the opened gate. We found ourselves being watched by Jerry Fitzpatrick, Dave’s bus driver. He motioned for the three of us to come over to the bus.

Nidhi, Derek and I went over to Jerry and struck up conversation. We were mid-conversation about his family in Arkansas when a white van pulled up and Jerry abruptly told us he had to go. Nidhi and I looked at each other and instantly could read each other’s minds: Dave!

The van door opened, and Jerry opened the bus door. They had this down to an art form, making it easy for Dave to go from vehicle to vehicle without hassle from fans. We saw a dark figure step out of the van door and could hardly contain ourselves.

Suddenly, there he was, Dave Matthews, the man I have spent thousands of hours of my life obsessing over. Despite my excitement, I oddly felt calm, cool and collected. Bundled up in a brown leather jacket, navy scarf and a brown fur hat, Dave Matthews stood before me offering a simple smile that showed a humbled man.

“I can’t believe it’s really you,” I stammered.

Dave smiled and wrapped his arms around, giving me the biggest bear hug.

The four of us exchanged small talk for a few minutes before we asked if he would mind taking a photo with us. Jerry then informed us that they had to be getting on the road to Toronto. We smiled and bid farewell, telling Dave we would be seeing him in Toronto and Charlottesville. He laughed and waved before climbing up to his bus and driving away.

I turned to Nidhi and almost fell into her arms. Meeting the man that has inspired me with his music was almost like a dream come true. I could barely wrap my head around what had just happened. It all seemed so surreal, so unexpected.  I always saw posts and photos of fans meeting Dave, but I never thought that would happen to me.

Fan interaction is one of the reasons that makes me fall in love with this band each time I see them. The love shown to the band and the love shown from the band is a beautiful sight.  Dave gave one final wave before riding off into the dark Chicago night, leaving behind a group of adoring fans beaming with smiles.

2 thoughts on “So Damn Lucky: The Day I Met Dave Matthews”