Pat, pat, pat- I could hear the rain falling from the sky and hitting our tent ever so softy. Barely opening my eyes, I could feel the tangle of bodies, sleeping bags and packs that were covering the floor of the small tent. The gentle hum of Kathleen’s faint breathing kept beat with the rain outside and I could only assume Libby had her infamous earplugs in. Smiling, I rolled back over; it was good to feel at home again, with my friends, in the middle of the woods. For a moment, we were free. The outside world didn’t exist. Right then, I wished we were back in New Zealand- times seemed much simpler then. We were so young, full of life and adventure. We were hopeful; the real world hadn’t knocked us down yet. 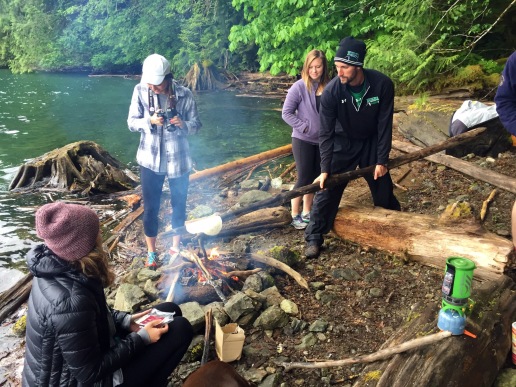 My thoughts were shaken with the girls waking up. Right away Libby turns and says, “We aren’t staying another night.” Laughing so hard I could feel my abs getting a work out. Kathleen and I agreed but Libby’s facials expressions make everything eight times funnier so we couldn’t help but laugh. Rolling out of the tent, we were disappointed to remember we weren’t so smart and left our shoes outside to get rained on. Yay, wet socks! Taking our time

Down on the beach, Dan was trying to start up another fire to cook breakfast. The wet wood, 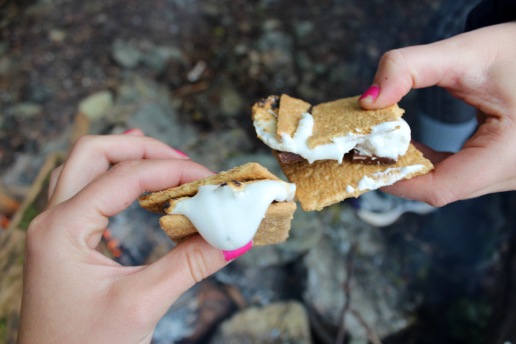 leaves and cardboard were proving to be quite challenging for a fire but after a little bit they got it started.

Gathering around the campfire, the seven of us looked a bit tired but mostly like we were freezing. Layered up, it felt like an early spring day in Washington. The clouds were grey and threatening rain. The air was damp and brisk. It wasn’t exactly the hot and humid Memorial Day Weekend we were used to in the Midwest and the South. Still, no one complained. Dan made oatmeal using a small makeshift stove. Kathleen took one look at me, said the word s’mores and went to find a stick. She knows I’m always up for a treat, even if it is 8am.

Charlie was running free, loving his little dog life again. Splashing into the water, he would paddle out to find a rock, lapping up water as he went. When he would get back to shore, he’s shake all around then repeat the pattern. So blissful, you could actually see the smile upon his little brown doggie face.

While eating, the girls knew we had to bring it up to the boys that we didn’t want to stay another night. Surprisingly they understood and said that they would go back as well. I suspect we were all tired, wet and cold but everyone was waiting for someone else to be the first complainer. Lucky for them, the three of us have no problem doing so.

Up in our little room of the woods, we were working on trying to stuff our tent back into its small bag. When everything is damp and dirty, it’s harder to do. Speeding along, we were trying to get ready and get going before the rest of them. Libby, Kathleen and I knew we would undoubtedly be the slowest ones so we figured, if we could get a nice head start, no one would get annoyed with us. Pulling out a few extra cobs of corn, Kathleen chucked them far off into the woods. The last thing we wanted to do was carry more than necessary. We were getting desperate for lighter packs- we knew the hell that was laid out before us.

Strapping those heavy packs on our backs we yelled to the rest of the group we were getting a head start then peeled out of there before anyone could object. Back to our makeshift trail, we were laughing and complaining the whole way. What was this poison ivy on our legs? Watch so you don’t roll your ankle on the loose roots. Why do we always put ourselves through this?

On the path, we realized the positive side is that now, we know that there is an end in sight. We would remember things along the path that we passed by coming in so we could at least gauge how long we had to go. We started climbing, up, down and around the trees. Through the trees where the trail was over grown, across the man made bridge and by the cave of rocks. Because of the rain the night before, the path was muddier than we had remembered. Still, we were just fine climbing along in our tennis shoes. Turning on the new Mumford & Sons album, we could walk, listen and cruise right along the path.

It felt like we were making excellent progress when suddenly, we dreadfully heard the collar of Charlie. Soon, bursting through the trees was the happy pup, carrying his pack and running along. Great. Kathleen was happy to see the dog but Libby and I weren’t so thrilled. Seeing Charlie meant the rest of the group wasn’t too far behind. We didn’t want to feel rushed and like we were holding up the group. We thought we were making good timing but apparently were wrong.

We could hear Dan’s booming voice calling for Charlie in the distance. They still sounded pretty far away so we thought we may still have time. Charlie ran back and we marched on. We didn’t want to stop for anything we just wanted to make it as far as we could before they caught us. Laughing to myself it felt very much like an SVU episode where a deranged man hunts the girls running through the woods. It felt like we had to escape and if they caught us- we were in trouble.

On we went, climbing a steep path but ultimately needing to stop for water at the top. It was then that Charlie ran up to us again, followed by the rest of the group. We had been caught. Smiles on their faces we told them to go on ahead and that we would be behind them. Sigh. I could feel the girls subconsciously moving at a little quicker speed because of the adjustment with the group so I casually feel behind a bit. Kathleen fed me chocolate and told me not to pout. To help make time pass, she turned on some pump up music and starting to ask this or that questions. She always knows how to make me feel better about any situation. I was again reminded that there are no other people I would rather be miserable with.

When we finally made it to the last bridge, you could feel the relief float from our shoulders. We perked up and were ready to take on the last half mile. Chins held high, we finished laughing and joking just like we started the day before. Of course, we didn’t want the others to know we had been complaining and pissy the whole time before so we at least had to make an appearance that we were having a grand old time- even if we were secretly thrilled to be done.

Emerging from the woods to the parking lot, we first saw Charlie sprawled out on the ground by our cars. He was worn out just like we were! The rest of the group had just started to pack up the vehicle as Eric informed us they only had been done about 20 minutes or so before us. Good, that means we successfully somewhat kept up, even if we did have a head start. Feeling accomplished I was all about shoving bags in the car and hitting the road. I for one wanted a shower, a snack and maybe a small nap. 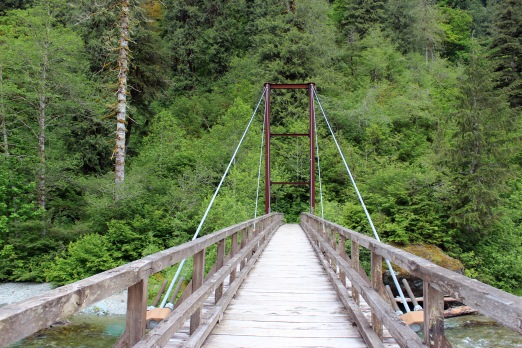 In my car, Kathleen, Libby, Paul and myself had a pretty chill and quiet drive home. Driving away from the mountains, the sun was starting to come out and warming up the PNW air. Even though we were miserable the whole time, part of me enjoys the small piece of misery we endure. Despite the complaining, deep down I think we all have fun. The laughs and the memories are always some of our favorites. The times where you feel like you are miserable often make for the best memories and stories. It’s the times that we always seem to reflect on and laugh about when we talk.

Driving back to Seattle, I never wanted the weekend to end. I didn’t want these amazing people to leave me again. After five months of constant togetherness, one weekend is simply not enough time. Thankfully, we had one more day of being girls and being friends and it wasn’t in the books to say goodbye quite yet. For now, we were heading to the city where Dan, Eric and Marissa would treat us to a homemade Italian meal and lots and lots of wine; the perfect farewell evening to our short-lived hello. 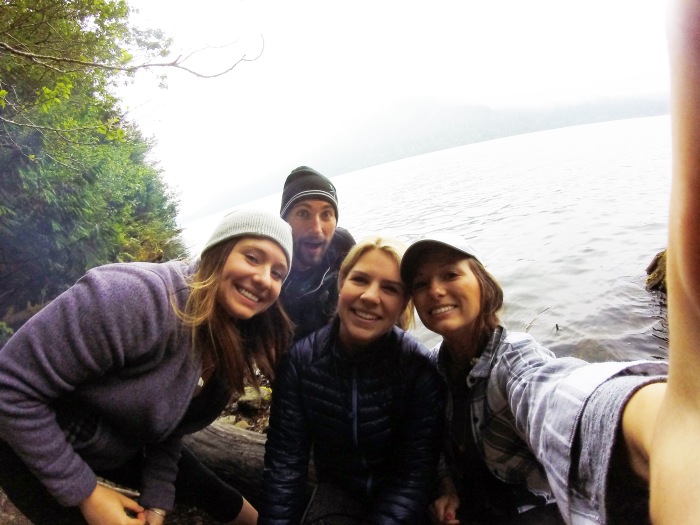 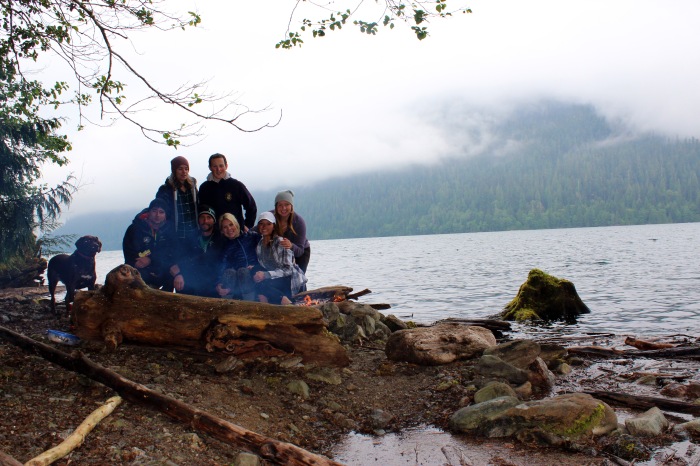 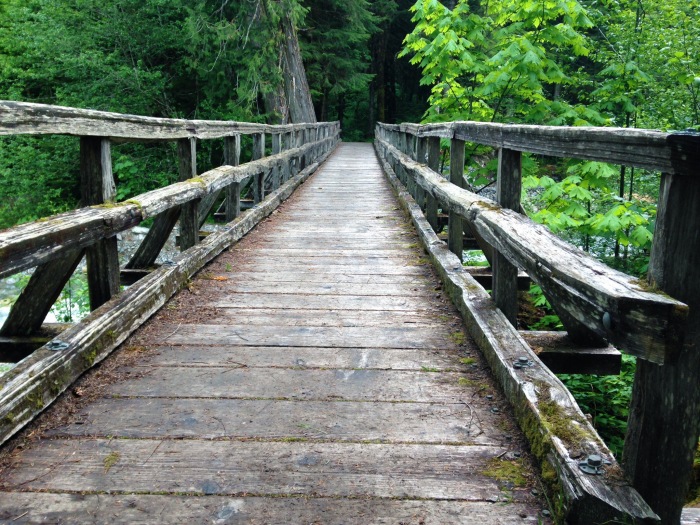 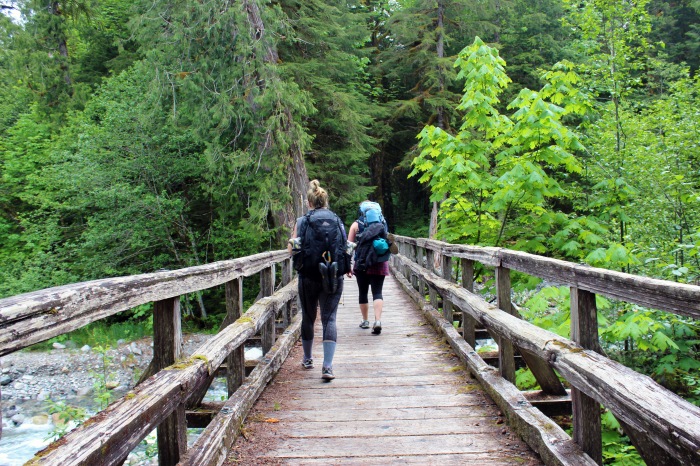 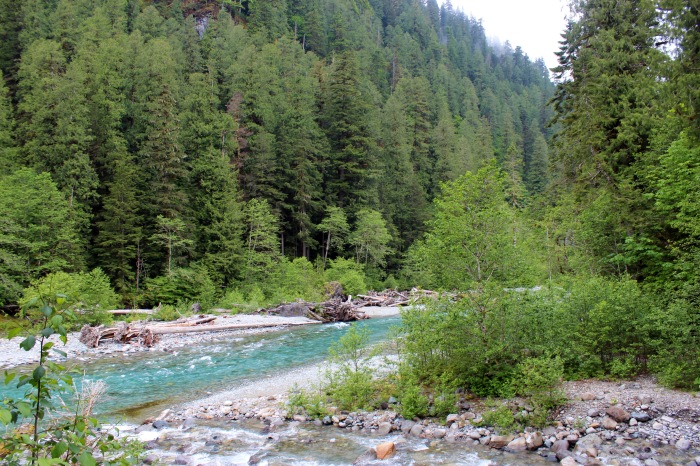