Thursday night before my departure I didn’t sleep very well. I tossed and turned all night long wondering if I was making the right decision. As part of my personality, I’m constantly worrying about taking the ‘right’ path and making the decisions that will make me the happiest in the long run. My students kept appearing to me in my dreams, which made me question my decision to leave them. At one of the points of waking, I checked my phone and found a message from Cerrissa on it. She had compiled a video of our friends sending personalized “Good Luck” messages. It was awesome. I started to relax a little and realized that everything would be okay. 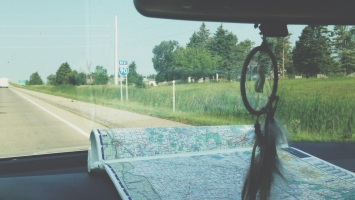 The next morning, I awoke at 5 am and departed for the west coast. I tearfully hugged my mother and step father and promised them a safe journey. I could tell my mom was fighting back tears and just wanted to get out of there before I had too long to sit and think everything over. The same situation occurred at my Dad’s house. My Dad, Stepmom and Grandma sent me off with tear filled eyes and I just didn’t want to think about it. As strange as it is, I just wanted to feel nothing. I wanted to not think about what I was leaving behind and simply focus on the journey ahead.

I turned left out of my Dad’s driveway and got on Interstate 90, which would lead me directly into Seattle. I guess that’s one way to feel close to home, it’s only one long road away. The journey started with fields as I made my way through Southwest Minnesota. Only a few hours and I had hit the South Dakota boarder. I pulled into the rest stop because I needed to get a photo with each state sign. A sweet elderly gentleman was sitting around with his 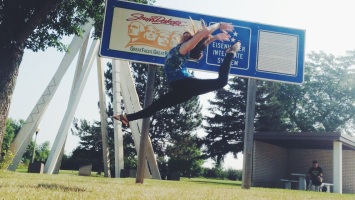 dog and we got to chatting. His daughter had made a similar move when she was my age and had the time of her life. He sprouted his knowledge and some more words of wisdom/advice and soon wished me on my way.

Driving through South Dakota was quite boring. I tried finding the beauty in the place but it was hard to see. The fields were nice but I can only take them for so long. I kept busy with music and various long phone calls to friends and family.

Around 2PM I had found my way into Wyoming. It was always rather exciting for me to cross a state boarder because that meant I got to get out, stretch my legs and take a new state photo! Oh the simple joys in life 😉 I’m pretty sure as I pulled over, it wasn’t exactly legal. I’m not sure on state rules but in Minnesota you aren’t supposed to just pull over on the freeway. However, I felt this was necessary. I needed that state sign. 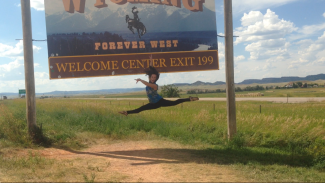 Wyoming itself was quite lovely. It’s openness humbled me and reminded me how small we are in comparative to the earth. For a moment in time, I felt like I was the only one in the world. The state was so large and spread out; yet, there was no one else on the road. It launched me into deep thought about how big this place is, how much there is to see and if there is every enough ‘time’ to see it all. (that’s a blog for another day) 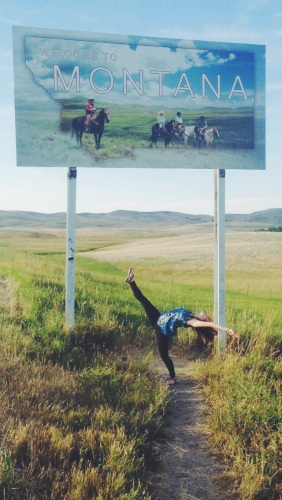 It didn’t take long to get through Wyoming; only a few hours, so, I was in Montana before sunset. Again, I pulled over near the state sign to get my photo. This time, there was a truck with two young boys also pulled over. I was hoping they would leave when I got there but they didn’t seem to be in any rush. I got out and struck up conversation with them. They were cowboys from New Mexico- heading to Montana for a rodeo this weekend. I think they were a bit taken back by me asking for them to take my photo but, I just seemed silly to set up the self-timer with them there. As I jumped, leaped and twirled around they looked at me like I was crazy! And, I don’t exactly blame them, ha! After a few shots, I took their photo then we bid farewell.

I continued along I-90, occasionally checking my road atlas to gauge my progress. I decided I wanted to make it to Billings, Montana on the first night because that would put me exactly half way to Seattle. When I got to Billings, I got some dinner, re-fueled but decided I wasn’t tired and wanted to keep pushing forward. The next large city was Boseman, MT so I thought I would try to make it there. As I left Billings the sun was setting creating quite the contrast against the scenery. It was lovely. A little sliver of moon broke through the black sky and as I was driving a shooting star fell into the abyss. In that moment, I felt like everything was happening for a good reason.

The roads through Montana were definitely not the same as Minnesota and South Dakota. Winding up and around the bends, despite the 75MPH speed limit I often found myself cruising at a much lower speed just to try to see the road. The dark sky and emptiness surrounding me made me feel tired and anxious. Before I left, I was warned that in this part of the country, hotels were often booked but I assumed I would still be able to find something- wrong.

Traveling through the dark, I could feel my eyes grow tired and decided I needed to stop in Bozeman. I was trying to google hotels but ultimately ended up consulting in a friend on the east coast for help. Together, the two of us looked up hotels along the way and called for openings. Nothing. We tried every small town along the way, Billings and even as far west at Butte but there was absolutely nothing available for the night. Feeling a bit defeated I decided to look on the bright side; at least I was saving money. 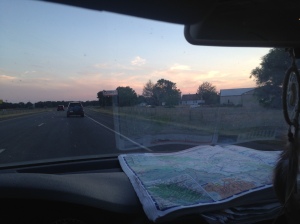 In Bozeman I pulled off and found a WalMart right off I-90. I had heard from Cerissa that WalMart was a safe spot to sleep for the night and in fact they encouraged campers and travelers to stay in their parking lots rather than driving tired. She was right! Upon entering the parking lot, I found myself surrounded by at least 10 RVs and pop-up campers as well as a hand full of cars that clearly had people sleeping in them. I decided this won’t be so bad and parked near an RV. Being that my car was filled to it’s brim with boxes and things, I wasn’t able to recline my seat at all and instead curled up in a ball and laid against my suitcase in the passenger seat.

I fell asleep for a few hours, but really, it wasn’t the most comfortable of situations. I moved the car away from the rest of the RV’s around 2AM because I didn’t like the idea of someone watching me sleep. I covered my face with my blanket and fell back asleep for a few more hours.

The first day of my traveling was done and there in the middle of Montana I was snoozing away in my car. If someone would have told me my life was going to be like this when I was 16, 18 or even 21 years old, I don’t think I would have believed them. However, it’s made up of adventures and wonderful moments that are even better than I would have picked for myself. I was taking in every moment along the drive; after all, the spaces between the large moments in life, are the moments that make up our stories.