If summer has to end, then I wanted to be sure to go out with a bang. One of my favorite things about moving is not only the exploring of the infinite abyss but also, the seemingly endless amount of visitors. The past two weeks have definitely had me exploring the PNW, West Coast and Seattle as well as enjoying a vast flow of friends in and out of our house and ‘hotel’. Let’s start with a few weeks ago;

C and I had been prepping for an extensive 12-day road trip up and down the West Coast. 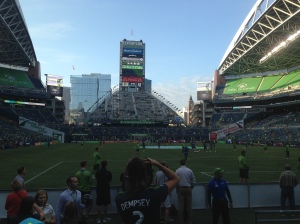 We had planned on camping in the car and along the way picking up and dropping off different friends as we made our way up and down the I-5. The end of summer vacation extravaganza began with our friend, Nick flying in from New York to spend a few days in Seattle before we took off. He came in on Tuesday and we hung out and showed him all our favorite Seattle locations the next few days. One of my favorites was going to the Seattle Sounders game. The crowd energy in the stadium was incredible. I’m not a huge soccer person, okay, I actually know nothing at all about the sport, however, it was fun! The fan GA section was rioting with cheers left and right. From the moment I stepped into the stadium I don’t think it was quiet for a moment. I heard once before that the fans were so loud they set off a mini earthquake. I’m not sure on the facts of that but that’s the word on the street… 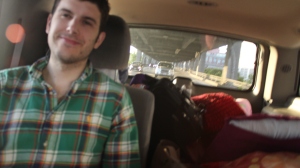 When Thursday finally rolled around, we loaded up the Tahoe with all our sleeping bags, blankets and bags and jetted south on the I-5. On this particular day the sun was shining ever so brightly across Rainer as we headed away from home. I love driving this route at dusk. The outline of the mountains stand so strong along the beautiful painted colors in the sky. I love the way the sun kisses the sky goodnight and allows the moon to take over as the black sky fills with bright, sparkling stars. I can’t help but smile to myself as we drive along the Washington state line. I realize we are all programmed differently, but, I can’t help but wonder how anyone would choose the grey, concrete jungle of a city to the stunning landscapes Mother Nature provides. I sometimes wish I could get lost in the mountainside and stay for a while.

We drove off into the night, winding our way around and through the mountains and foothills. We traded off drivers when we filled up on gas and continued to drive. It was about a fourteen/thirteen hour drive south to San Francisco and we were hoping to make it at least half way tonight. With Nick snoozing away in the backseat, C and I chugged along, fighting back yawns with funny stories, laughs and music. 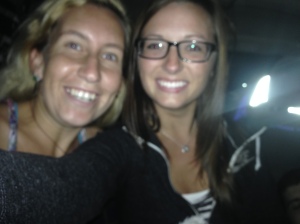 A bit past Portland we decided we had driven far enough for the day. We had made our goal of about 7 hours into the drive and decided it would be okay to sleep for a few hours. We found a rest stop, a classy rest stop mind you, and veered in. The backseat chairs all folded down to a nice large flat surface. We rolled out the yoga mats, sleeping bags and blankets to make a nice and comfy “Queen Size” bed. The three of us cuddled in together, laughing over the scenario that was happening. I think Nick may have been a little out of his comfort zone, sleeping in a car in the middle of nowhere isn’t exactly something you do in New York City. But hey, we were here to help him push those boundaries of fun.