With the sun beating through the Tahoe windows the next morning, I put on my glasses and peered

up over the front window to see the beautiful mountains saying good morning. What a view to wake to! Before we could ever stretch, C jumped into the front seat, revved up the engine and away we went back down the freeway toward San Fran. I jumped to the front seat and road along, my eyes heavily falling in and out of sleep.

Two hours later we were near the California/Oregon boarder. C woke me up and told me we were near. She was on board with my lovefor taking photos with the State signs and wanted to make sure I got this one. It came up quick on us but we were able to pull off a few hundred feet from the sign. Nick and I trotted out to the sign as cars were whizzing past. He took his selfie with the sign and I got my dance photo. Happy with our photos we went back to the car. I realized that I couldn’t remember if I had told my parents my parents that I was jetting down the coast so I figured I would remind them with a photo of the California state sign, ha.

It was a beautiful day out. I wonder if few things truly beat a West Coast summer? I am thinking not many. The bright blue skies of California were welcoming and Nick was intrigued by the mountains, scenery and of course, the cows. He and I traded spots in the Tahoe and I crawled back into the bed

and drifted off to a silent slumber. I must have slept for a few hours longer than I had intended because when I woke up we were awfully close to San Francisco.

With tired eyes I peered through the window and quickly decided this was place worth seeing for all. I loved the way the bridges and the buildings corresponded with the water below creating a peaceful and calming setting, even with the rush of traffic around. We cruised through the city in search of the most obvious first stop one could make in San Fran; The Full House, House! Since Nick had watched so many episodes on his way out here we quickly decided that had to be the first place we went. 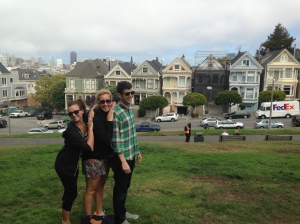 was gusting around all over the place. The steep, steep hills of the city made parking an adventure in itself (try parallel parking the Tahoe uphill in San Francisco; not a fun thing). We visited Alamo Square and the famous Painted Ladies houses. Of course, taking the most ridiculous photos and selfies in front of it. Side Note apparently, the Painted Ladies and the Park are only used in the opening credits but not the actual house. Which, we didn’t find out until we were long gone, like two weeks too late. Sad. Either way, the Painted Ladies were absolutely adorable

The next stop in San Fran was Lombard Street. Which, if you aren’t familiar is a street that goes completely zig-zag down. It was crazy! The craziest part in my mind was the fact that people lived on that street. How in the world would you ever be able to get into your garage?! Blew my mind. After our few stops,

we needed to get going back across the bridge to Berkeley for night one of DMB’s three-night stand at the beautiful Greek Theater.

As luck would have it, San Francisco traffic is the absolute
worst. I mean the worst. It took us over an hour to travel less than a mile.
Surprisingly, none of us were concerned with the fact that we could possibly be late to the DMB show. It was strange not only to not be line waiting or on rail but to also be almost late. Lucky for us, DMB is also notorious for being late to their own sets. By the time we got to Berkeley College it was damn near show time. 6:50PM and we were circling the college, desperately looking for anyplace to park. Alas, we found a spot in a broken down lot and dashed up the blocks and into the theater. We walked in just as Dave was walking onto

the stage to start the show- what good timing

The entire venue was absolutely stunning. Just as you would expect out of the Greek Theater, it gave off a very ancient Greece theme, complete with throne seating at the back of the pit. The sound was fabulous and DMB played one heck of a show. We danced and sang in the middle of the pit and enjoyed seeing the light show that we often miss when we are on the rail. DMB jammed their way through some of my favorite
songs. It was awesome to be back at a show and before the last note was played, I was already looking forward to what the next two weeks of shows had in store for us.

When the music was over and the house lights came on, we  made our way through the crowds to hug and greet all our tour friends that we either haven’t seen since July or since last year. It’s crazy how some relationships can pick right up where they left off as if nothing has changed. We must have been some of the last people out of that venue, but something about that band makes us want to stay for forever. Alas, it was time to go get food and get some rest before the shows the rest of the weekend. We found our camping spots and rolled out our sleeping bags for the evening. Luckily, the California air wasn’t so bad in the nighttime and the faint city lights acted like a sweet nightlight. It’s crazy how peaceful and calm it can be to sleep in the middle of a city. 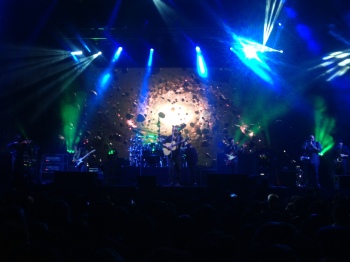