“What do you love about music?” “To begin with… everything.”

Sometimes, what starts as a wonderful adventure- turns into something so much more than you could have ever planned.

Dave and I were nearing our anniversary and to celebrate our year together, I knew it would be only appropriate to surprise him with tickets to an exclusive Imagine Dragons concert. Having met at a concert, our bands hold very special places in our hearts and perfectly lay the soundtrack to our love story. I felt it was too good to be true when a good friend helped me snag two tickets to this exclusive event- held at the historic Hollywood Palladium on Sunset Blvd in Los Angeles. Composing a letter expressing my feelings using Imagine Dragons song titles, I was pleased at how surprised and excited Dave was once he solved my riddle and realized what the surprise was.

The next morning, off we went- bright and early, driving with the flow of traffic on our way to Los Angeles for a day of music and sunshine. Of course, I wouldn’t be the copilot I am without falling asleep for most of the drive. Poor Dave just smiled, let me sleep and listened to the band so pump him up even more. Arriving in Los Angeles around 9am we headed straight to the venue to check out what the situation would be like. Surprisingly- there were a few people already at the venue but the line was only about 5 long when we pulled up.

As the hot Southern California sun beat down on the pavement, we used vehicles, palm trees and signs to get whatever sliver of shade we could. At 90 degrees at 9am, this was less than appealing conditions to be sitting outside all day in. Not long into our shade searching morning, an elderly woman, whom we would later find out was named Jan, arrived and asked to share some shade. We began talking immediately and quickly found out she was a huge fan of the band and decided to come alone to the show.

The self-proclaimed “Grandma of Imagine Dragons” and I hit it off right away. Despite having a few decades of age difference, we were amused to find out how much we had in common. Studying Journalism, teaching dance, music lovers, having a long distance relationship that stemmed from Seattle to California- even our S/O had the same birthday! It seemed as if she was this angel that came out of nowhere to teach me something. I could feel from the moment our paths crossed, that I was meant to know her. For some reason I wasn’t sure of at the time, our roads were meant to tangle- if only for a short time.

Nine AM turned to noon then to 2PM. The sun grew hotter, our faces became redder and we looked as if we were overheating by the second. Our spirits were high; no matter the pain of the line wait- the concert is always worth it. The line behind us had started to grow immensely. What began as 10 of us hanging out on a warm LA morning quickly grew to a few hundred of fans, anxiously waiting for the doors to open.

With one hour to go until doors were set to open, Grandma Jan and I were talking to the two others behind us in line when a woman interrupted me, “Sorry to interrupt, this may sound creepy… how old are you? Did you say you’ve been waiting out here all day?” Sarah, as I would learn, stood before me with a small man holding a camera.

Telling her my age and a little bit about my journey through the day, she asked if Dave and I would mind being interviewed for a project she was working on. We agreed without fully knowing what we were getting ourselves into. Back with her crew, Sarah interviewed us with the backdrop of a few hundred Imagine Dragon fans behind us, just off the street of Sunset Blvd. She asked us why we love the band, how we got tickets, what our experience waiting was like and other various fan questions.

After we wrapped, we assumed we were done helping her out. Little did we know she had much more in mind for us. Filming us walking the red carpet, past the elaborate Imagine Dragons lit up signs and hedges, she slipped some meet and greet bracelets on us and marched us inside the venue. Citi was making sure its customers were getting the all-star treatment tonight. The old, historic venue was decorated like nothing short than an A-List event. Red carpets decorated the sidewalk leading into the venue, chandeliers sparkled from the beams of light that spewed across the entry and the bands name was lit up and plastered tastefully around the venue. Small and intimate, most of the fans would be housed downstairs with a select few “VIPs” on the sides upstairs. Sarah and her crew kept the cameras rolling as they took Dave and myself up to the private Citi Corporate event and introduced us to the band. The whole time, Dave and I kept looking at one another- both a little in shock of the events that were unfolding in front of us.

Dan, Wayne, Ben and Daniel looked exhausted but kept those smiles on their faces as they greeted fans, shook hands, gave hugs and posed for photos. When it was our turn, I’m not sure I even knew what to say. Dave of course, handled himself like a pro and genuinely thanked them for their music and for taking the time to meet with a select few fans.

After a photo and some hugs, the band went backstage to finish getting ready and the corporate folks went back to dining and drinking. Dave and myself, were brought back downstairs to film the classic “run for the rail.” Despite having done the race for the rail many, many times- it never gets less stressful. My heart immediately began to race as I know from past experience, once the line gets let in, all bets are off and anything could happen. Running backwards in front of us- the cameraman filmed the entire run from entrance to rail. Front and center- Dave and I were relieved when Grandma Jan came dancing through the doors and we were able to secure her spot next to us on the rail.

Just when we thought we were settled in for the show, our camera guy came over and said he wanted to re-film the run in. Sarah, immediately stood up and said she didn’t think it was a good idea- she wanted us in our spots so that we would have them for the show. They discussed and finally she stood on the rail and announced, “These two are with us- they WILL be getting this spot back so make sure you hold it for them.” Feeling a little strange about all the special treatment, we went with the camera guy and did the run in twice more before he felt he had gotten a great shot to use. Luckily, the fans were pretty supportive and let us right back in for our spots on the rail, next to Jan.

n the side of the stage were screens and soon, a video of Imagine Dragons was projected onto the screens. The intro to the show was different than anything I had experienced before, so I was excited to see what the night was going to lead. So far, we had already had a day that was bigger than what we had planned, so our expectations had already been overcome.

The lights were down, the stage set up and the crowd restless. Soon, they would appear on stage- using his body as a drum, Dan Reynolds and his band- Imagine Dragons, wooed the small intimate Los Angeles crowd with the sweet verses of “It’s Time.” From the front row, I glanced next to me at Dave, squeezed his hand and silently said thanks to our fate for this once in a lifetime day we just had.

After the first song, the crowd erupted with applauds, cheers and screams. The smiles across the bands faces were a sweet reminder of what it’s like to see a band that appreciates it’s fans and still gets a high from the energy their fans give off. Dan spoke to the crowd, introduced them, and informed us that this would be different than a regular show of theirs. Instead, he tore of the set list and said they would be playing songs, talking about the band, explaining reasoning’s behind stories and giving their fans an intimate look at who they really were. Awesome. Since we had seen them back in July, we were really excited for this intimate showing.

Without lacking an ounce of energy, they played, sang and danced their way into the crowds heart with each song. During “Trouble” Dan jumped from the stage, walked to the fans on stage left before finding Grandma Jan in the center, and proceeding to hold her hand and sing to her for the remainder of the song. In that moment, I was so happy for her, I felt as if I could cry. This was a moment that made me fall in love music time and time again. I love how a song, a lyric, a band can bring people together, evoke emotions and make the worlds problems seem to go away. In those moments in a show- you’re lost, found, and on the biggest high of ecstasy. Music allows us to go where our hearts ache to be, it opens up our souls and rips us apart so we are feeling the most raw and genuine emotion.

They played, danced and rocked a two-hour set that had their fans begging for more. Not once, did you see them slow down or lose their energy. Their commitment to the music was incredible to see- something that is occasionally lacking in bands these days. Closing their set- they paid tribute to the song that put them on the map and launched them to stardom, “Radioactive.” Dan’s eyes glistened and at parts, I wondered if he was growing emotional. From playing birthday parties in Vegas to selling out stadiums around the world- it’s amazing how humbled the guys could be. How genuine they came across on stage and how after touring for nearly 5 years straight- they give their all during their shows. It’s quite refreshing as a fan to see.

When the band had left, the house lights came on, and the crowd started to clear- Dave and I were expected to give one last interview. Holding tightly to the drumstick Jan had received then handed off to me, we spoke of our day, the show and how thankful we were of the opportunity Citi had given us. The day that started off as a surprise for my sweetheart, had taken surprise turns left and right and led us to an unforgettable day with a new friend that I’m sure will stick around.

Life is truly an adventure to be had; you mustn’t be afraid to get out there, take chances, and get off the beaten path to explore. You must always remember there is a plan that will undoubtedly go differently than you wanted, but frequently there are pleasant surprises at that end of the path. You won’t regret these chances, more often than not- you’ll be able to turn them into an amazing story.  Life is quite the ride- enjoy it. These moments, these days- these are the good days. 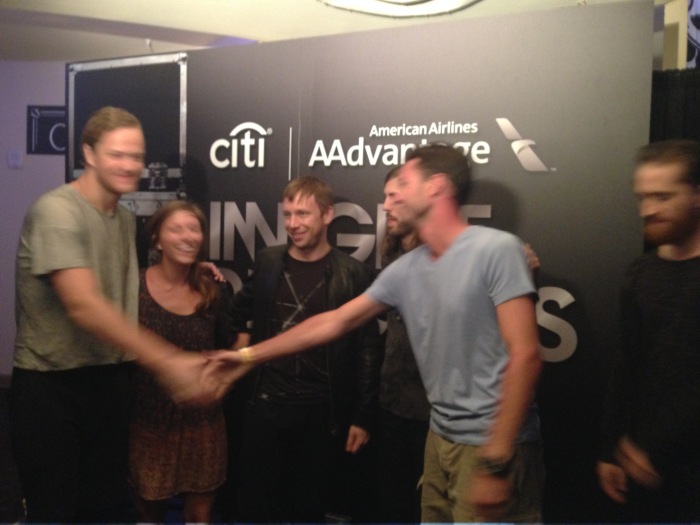 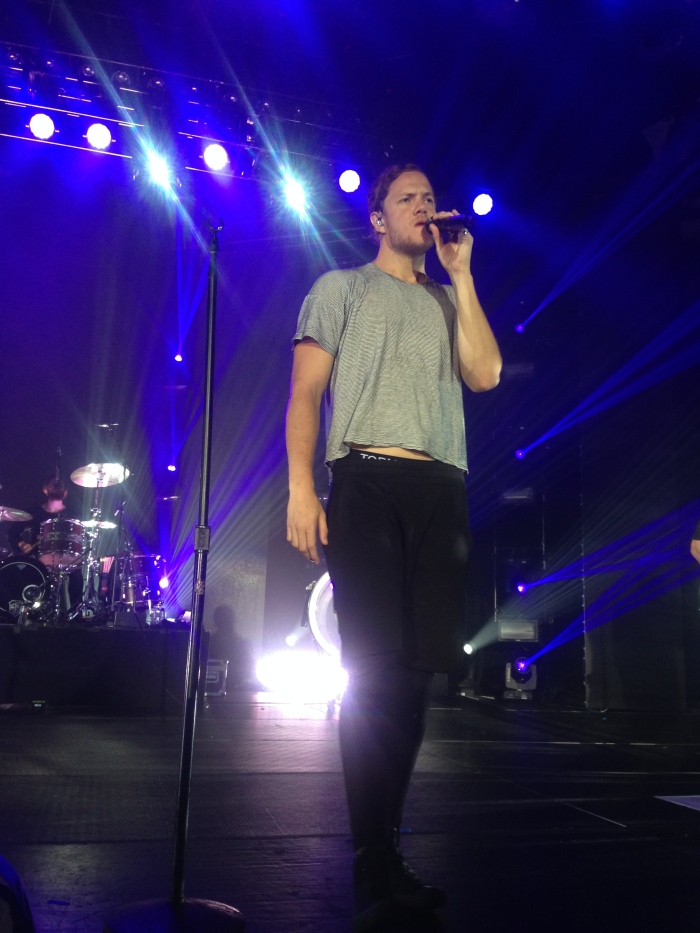