When’s the last time you did something for the first time?

Standing at the starting line for my third Tough Mudder, my adrenaline was racing as I listened to Sean give his pre-race speech. “When is the last time you did something for the first time? I challenge you to do something for the first time, once a week. It’s how you honor yourself and live a your life to the fullest.” I loved it. I loved hearing that speech the first time I heard it in Portland, I loved it when I heard it in Seattle and right now, in Temeucla, I loved it all over again. I love the idea of constantly doing new things, striving to take control of your life and constantly engaging in new things that make you think, feel and react. It’s a valuable part of growing and I for one, hope to never stop growing and progressing.

Before I knew it, the speech was over and Sean was sending us off into 10 miles of hell. Thanks to Brady, we were in the muddy water before we could barely run 20 feet. 5-4-3-2-1 as soon as the crowd shouted 1 and the blow horn went off, off we went, racing towards the water and towards a course of pain. Dave immediately took the opportunity to cannon ball into the water and start the race off with a bang… er, I mean a splash. 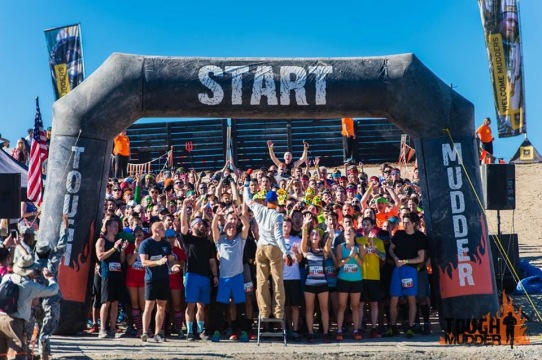 Our group of 15 (#TeamMerrill) still had the smiles on our faces as one by one we unloaded into the swampy lake and tangled out feet in the mud. As we trudged forward, it was soon apparent that this would not be an easy walk like we had hoped. Instead, we were on our knees, waddling, swimming, and doing whatever it took to get through mud and the muck that was holding us down. I was feeling good and confidant about the course ahead. Being less than a half mile into it however, I should have known better than to start to think this was going to be easy.

Once we escaped the muddy swamp, we began our first of what was undoubtedly going to be many, miles of running. Up, down and around the foothills we went- our group slowly but surly breaking apart and grouping by speed. Somehow, I was able to keep up a bit but not nearly as fast as the guys. I waved Dave off and started to try to pace myself for what the next four hours would bring to me: misery.

Since we were the voice for TeamMerrill we gathered before each obstacle so that we could ensure the group was staying together and also so the photographer could have us bunched together in hopes of getting the shots he needed. Next up for obstacles: Kiss of Mud. Because, what better way to start a Tough Mudder than with the two infamous things: getting wet and getting muddy. Just as you would expect, Kiss of Mud was designed to get you on your stomach, crawling through muddy goop and as the title would suggest, even painting your face for the next four hours.

Onward run, we were starting Mile 2 and soon I found myself in the back. Sigh. I began to question myself why I do this? I’m not a good runner at all, in fact, most of the time I have such bad knee pain from running I have to stop. Yet, here I am again trying for another. Sometimes I think I want to be a runner, I want to be able to run for miles and feel great but sadly, I’m not there. Instead, I push through the misery and pain and start to choke back tears as I can feel the tendons in my knees already hating me for doing this to them. The worst part of all, with only mile 2 under my belt- the worst of it hadn’t even began.

Up we ran, literally, up the mountain we went. It. Was. Awful. Not only is running one of my toughest challenges, but also throw an uphill mountain run and you’ve just about beat me down. Mile 3 and mile 4 proved to be a challenge and they started the first of the uphill runs for the morning. At one point, I was alone, fighting back the tears so hard because I knew the mud caked hands wouldn’t suffice to wipe them away. Why oh why was I doing this? I promised myself, never again. This was it. I didn’t want to even endure another miserable 10 miles again. As a nice topping on the cake- at the end of mile 5, Brady had us doing Funky Monkey- monkey bars that were swinging back and forth testing your arm and core strength. The only thing I could excel with in Tough Mudders are the obstacles, so I was surprisingly relieved to see it was Funky Monkey- an obstacle I knew I could do with no problem.

The next few miles were a blur. Up, down, up, down- ice bath here, rope climb there, hurling yourself over a 10-foot wall, scaling down the side of a cliff, the fun never ended. I wasn’t sure what mile we were on, what obstacle we were on or even what time it was. I was focused on two things: not dying and finishing. When my knee began to cause too much pain that I had no choice but to cry- Dave suggested I let the photographer take me to the finish line. Determined: I didn’t want to be a quitter. I heard what he was saying, my career as a dance instructor depends on me being healthy and able to use my body but something I hold higher than my career is my pride. I was too far in it now; I didn’t want to give up. I would have rather cried and limped down the side of the mountain but dang it- I was going to finish with the group and add another color headband to my collection.

By the time we reached Everest, a quick jaunt up a half pike, I could see that the end was coming. The course wrapped around and did a few smaller hills but all in all I knew it was coming. We had mostly obstacles left, I was ready to just be done. More of the team began to fall back to my pace so I wasn’t left alone as much. And, when it came time to finish, all fifteen #TeamMerrill Mudders gathered and ran through the finish line; retrieving our headbands along the way.

Done. Finished. Tough Mudder #3: SoCal was done. I had made it. Hugging Dave and high fiving our friends, I remembered right then why it’s so rewarding to do. All that pain, all that suffering, all the sweat and tears- it’s such an accomplishing feeling to know you can do it, you can carry through, you won’t die. I even decided, I may, just may be back to do Tough Mudder #4 in Los Angeles this winter.

I don’t remember a time I had ever been so exhausted. It was 8:30PM on Halloween and Dave and I were getting ready to bed. He might be a little crazy (he is and I love it) but the next morning we were up by 6am, out the door by 6:30 and making our way back to Temecula so Dave could run the course again with Brady. Ahh.. I think I’ll just sit this one out.

The two men took the first lap out in the morning, while I followed along on the spectator routes. The course was much quieter than it was the day before so it was easy to spot them at each obstacle right away. As much “fun” I want to believe I’m having while doing these- I absolutely love watching and cheering Dave on as he races like a madman up the mountains before crashing into a pile of mud. They cruised at a pace that was much quicker than we had ran the day before- which I could see was bringing him so much joy. The sun beat down on my shoulders and in that moment, nothing was making me happier than cheering Dave on, see him so happy and enjoying a little sunshine all wrapped in to one.

Halloween weekend to some entails nothing but blackout madness and elaborate amazing costumes but for us- the weekend and the challenge for ourselves, is to continue to grow; to challenge ourselves mentally and physically. To experience new things, spend time with our friends and to continue to find ways that make our lives exciting and full of life.

Tough Mudder: You are a pain in my butt each and every event. But, there’s something about you that is awfully enduring and makes me feel very grateful to be alive. Thank you for another tough, challenging and humbling weekend. 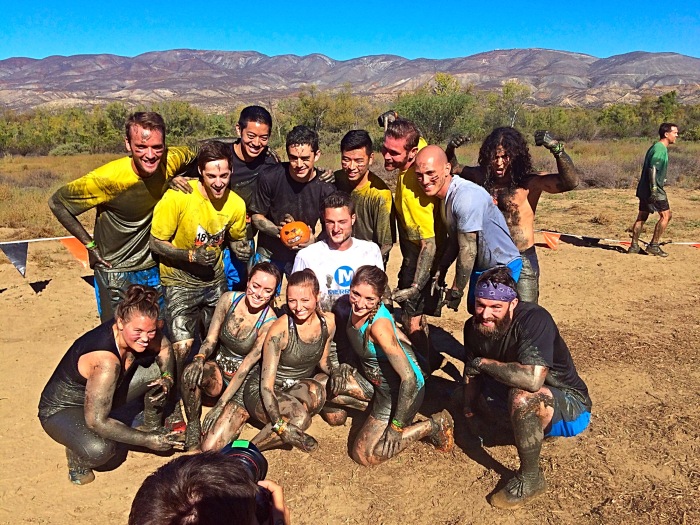 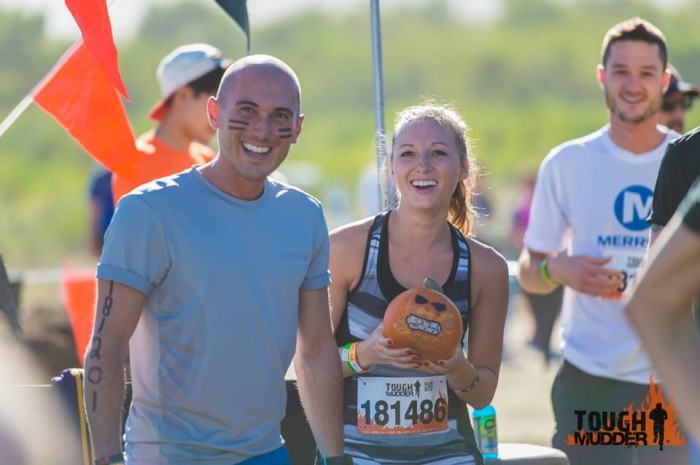 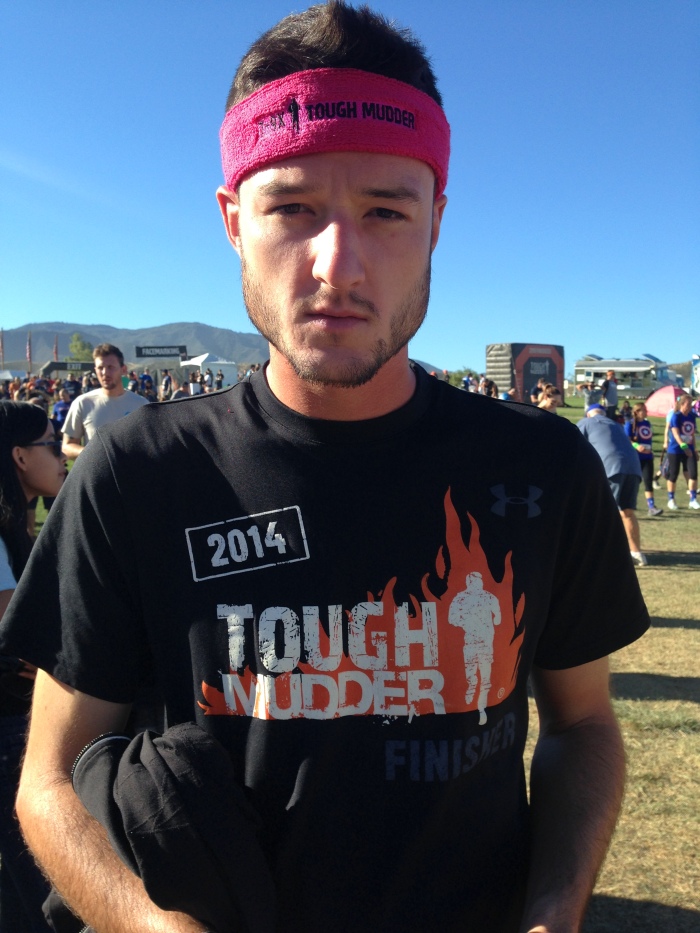 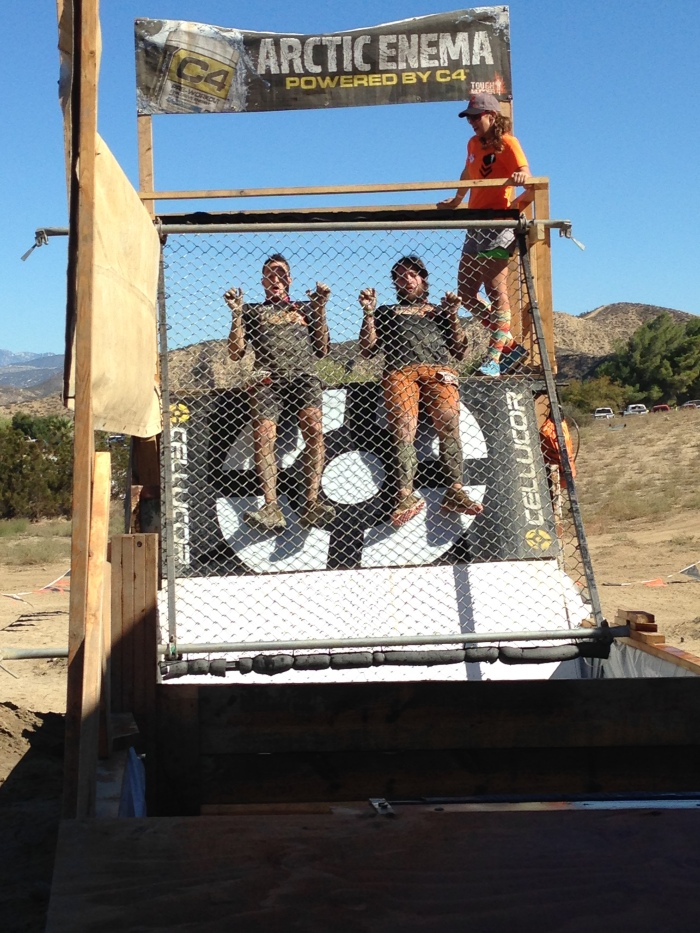 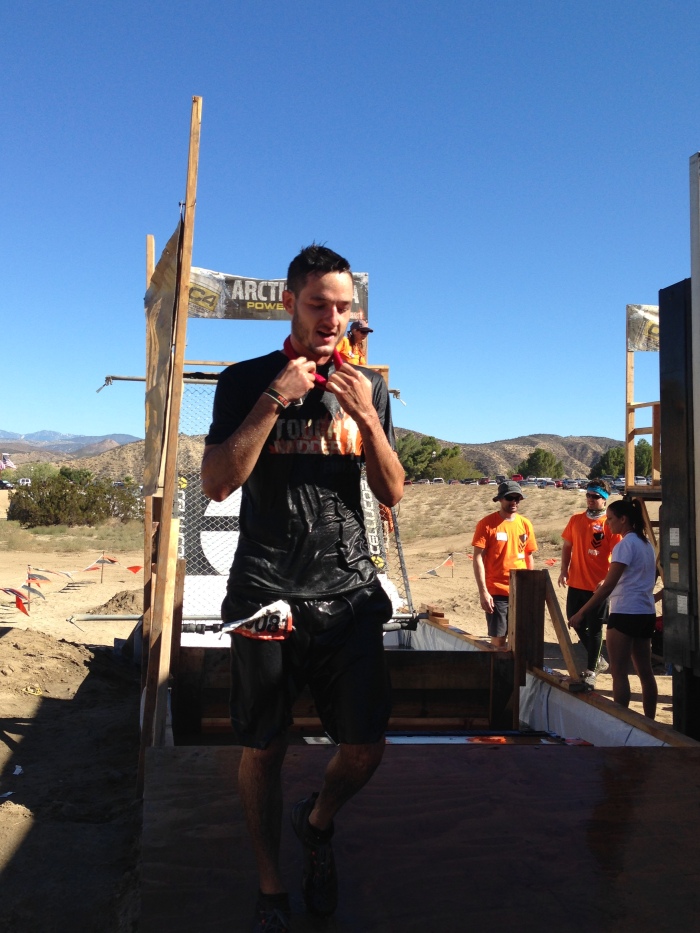 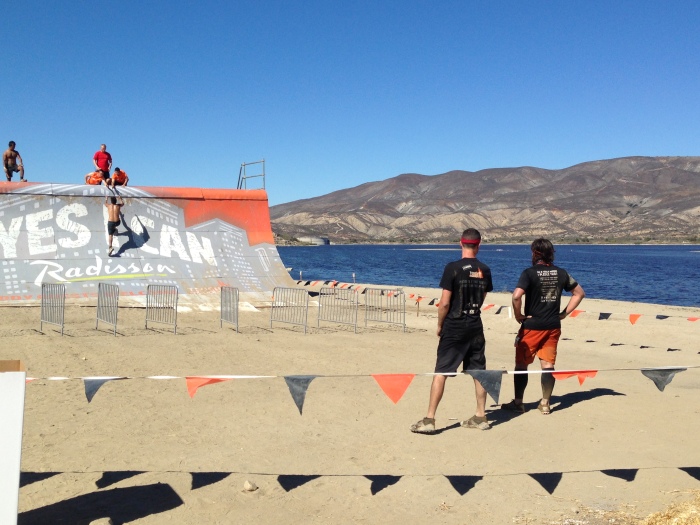 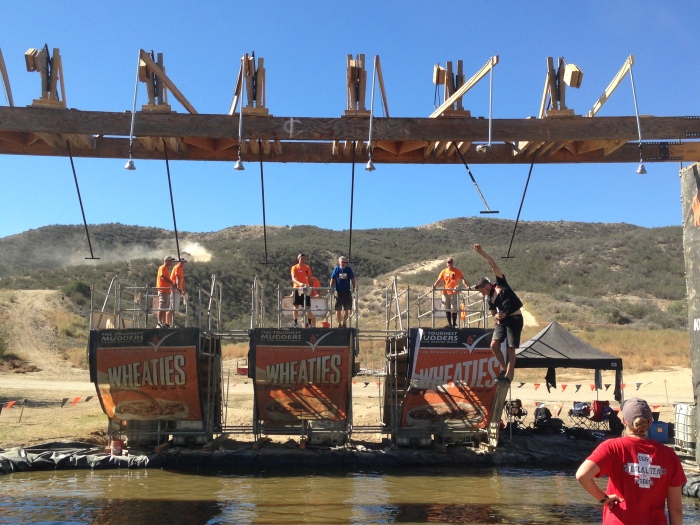 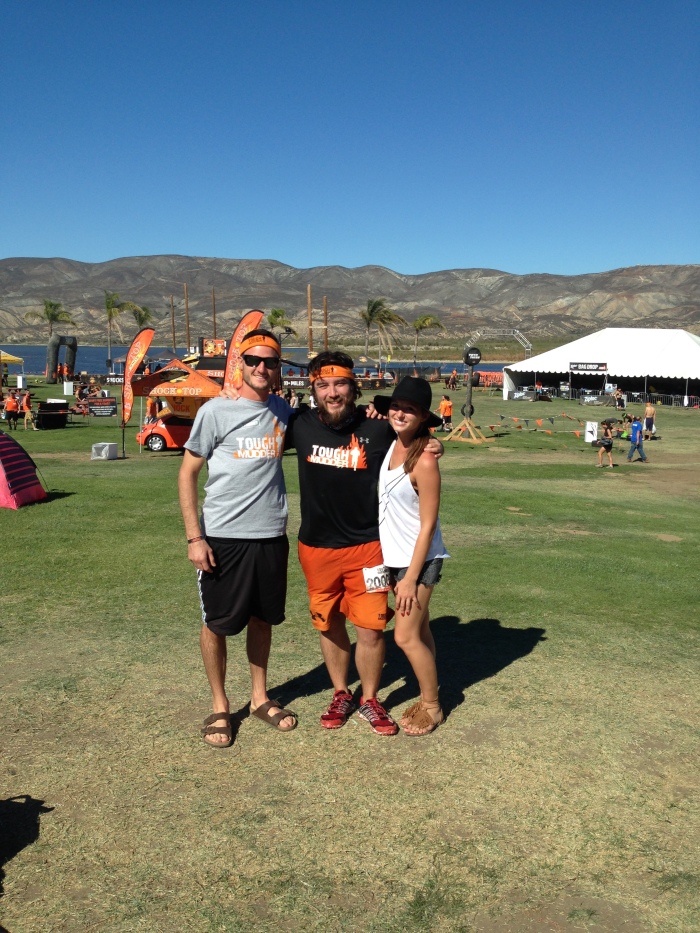 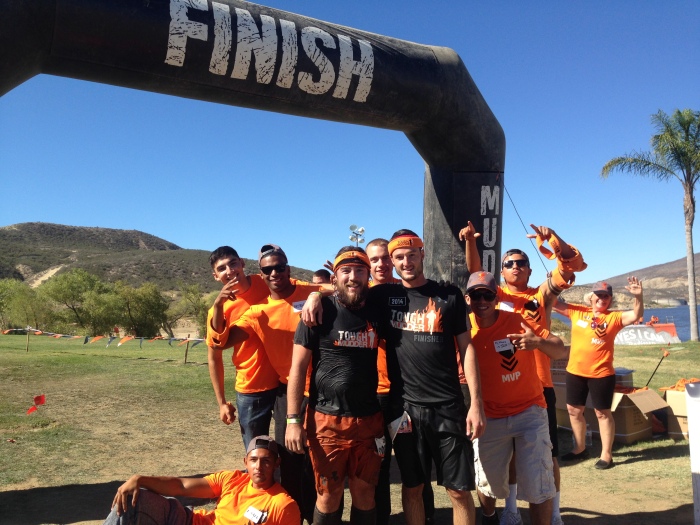 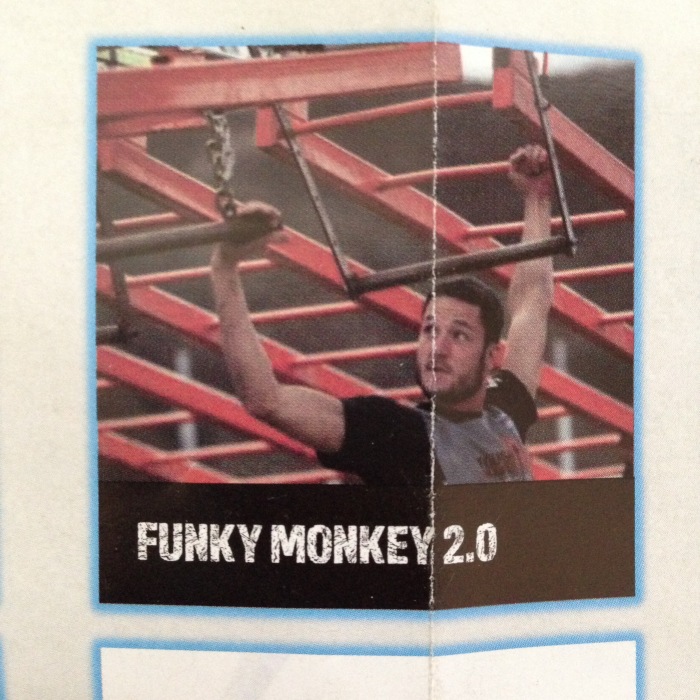